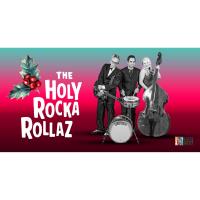 Plan to attend our Christmas Presenter Series show at the Pipestone Performing Arts Center with a night of festive, rock ‘n’ roll music. Take an authentic trip back to the fantastic 50’s with The Holy Rocka Rollaz! “Rockin’ Around The Christmas Tree!” “Jingle Bell Rock!” “Santa Baby!” “Run Rudolph Run!” And MANY more classic Christmas songs delivered LIVE by Minnesota’s own 50s rock ‘n’ roll trio. The Holy Rocka Rollaz will take the PPAC stage on Thursday, December 16th at 7:30 p.m. A Cash Bar will be available before the performance, and during intermission.

Nothing pleases these rock ‘n’ roll veterans more than seeing different generations enjoy this classic music together. The Holy Rocka Rollaz play with an immense amount of energy and joy. The trio collectively brings decades of live and studio experience to their shows and music.

Front man Mark Flora says his proudest moments come while playing the Winter Dance Party each year at the legendary Surf Ballroom in Clear Lake, IA. “Knowing that my band is regularly on the stage Buddy Holly played his last show, well, it just gives me chills,” he said. “And seeing our name annually on the Surf Ballroom’s marquee...well...that’ll never grow old!”

The band’s first show together was in the South Dakota State Penitentiary several years ago, serving in a ministry capacity, where Flora has been sharing good news to inmates since 2003. “We were having so much fun playing in the State Pen that we decided to take our music to car shows and other events. We really do enjoy playing 50s rock ‘n’ roll just the way it was played back in the day. Seeing people light up when we really go for it brings this band a lot of joy. We hope we can do this for many years and for many people,” said Flora.
Holy Rocka Rollaz Christmas Show

Google Yahoo iCal (Outlook, Apple, or other)
Scroll To Top